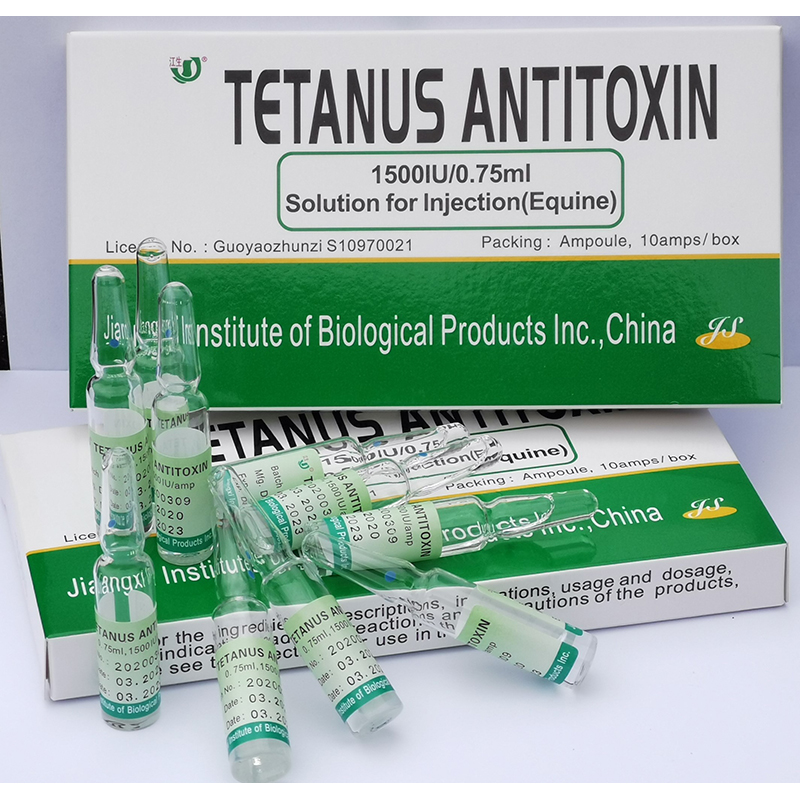 [Indications]The product is used for the prophylaxis and therapy of tetanus.


Send email to us

Tetanus Antitoxin is a colorless to yellowish clear solution, free from foreign matters, prepared from immunized plasma of healthy horses through the process of ammonium sulfate fractionation and ultra-filtration after being digested with pepsin. It provides temporary passive immunity against tetanus. Our company’s tetanus antitoxin injection are produced by modern GMP certified production line, it enjoys good reputation domesticly and overseas.

Read Direction Carefully Before Use REFINED TETANUS ANTITOXIN Refined Tetanus Antitoxin is a solution of modified globulin prepared from immunized plasma of healthy horses by peptic digestion and ammonium sul-phate fractionation. Indication & Use 1.For those started with tetanus symptoms or in suspicion, tetanus antitox-in should be given immediately together with surgical and other clinical adminis-tration at the same time. For those openly wounded, especally those wounded deeply and contami-nated seriously, and in danger of being infected with tetanus, prophylactic injec-tion of tetanus antitoxin should be given at once. Patients who have had previ-ous injection of tetanus toxoid should be boosted with one more injection of teta-nus toxoid(but not tetanus antitoxin). To those who haven’t had previous tetanus toxoid injection or without a clear history of immunization,both antitoxin and toxoid should be given for prophylaxis and permanent immunocompetence. 2.The right site for subcutaneous injection of the tetanus antitoxin is around the deltoid muscle of the upper arm. If tetanus toxoid is to be given at the same time, separate sites are desirable. The right site for intramuscular injection is the centre area of the deltoid muscle or the lateral upper part of the gluteus max-imum. Intravenous route should not be used until no untoward reaction occurs after intramuscular or subcutaneous injection. Intravenous injection should be done slowly enough:not more than 1ml/min at the beginning and don’t exceed 4 ml/min afteward. The total yolume for a single dose should be not more than 40ml for adults and not more than 0.8ml/kg of body weight for children. Tetanus antitoxin may be diluted with dextrose solution or physiological saline for intravenous drip. The drip must be stopped at once if any untoward reaction occurs. Recommended Dosage 1.Prophylactic Use:1500-3000l.U.both for adults and children. injection should be repeated after six days when contamination still ersists. In those cases who have been immunized previously with tetanus toxoid, it is advisable to give a booster dose of tetanus toxoid only. For prophylactic use the antitoxin may be given by subcutaneous or intra-muscular route. 2.Therapeutic use:Tetanus antitoxin should be administered as early as pos-sible. A case usually requires about 100,000-200,000 I.U.on average. A. Usually,50,000lU.of antitoxin should be given on the first and the fol-lowing day of illness,and 10,000 IU. is repeated on the third, fourth and eighth day respectively. B. The neonates with tetanus should receive 20,000-100,000l.U.antitoxin within 24 hours of illness either a single or separate dose. Adverse effects 1. Type I hypersensitivity reaction: anaphylaxis shock may suddenly occur